What a beautiful autumn we’re having! Snapshots of the Penticton downtown market the first weekend of October. Around 10 am, and already about 20 C.  Lovely sunny South Okanagan in British Columbia.  Oh by the way–northern BC got about 18 cm of snow the same day, I’m told 🙂 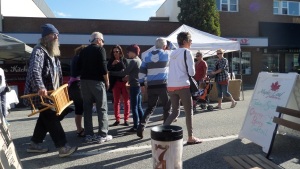 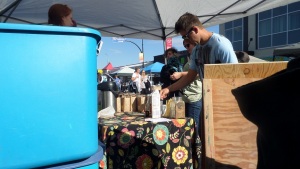 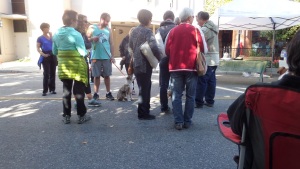 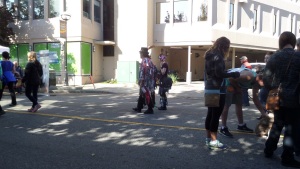 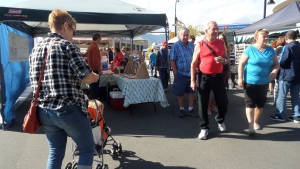 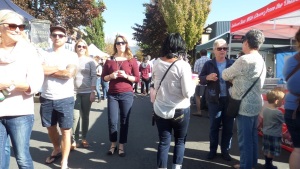 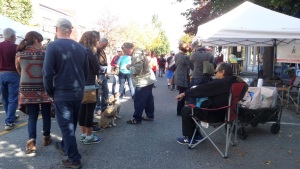 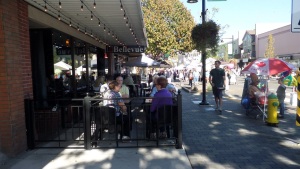 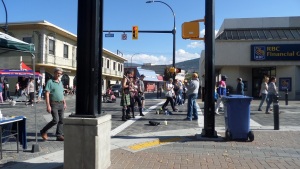 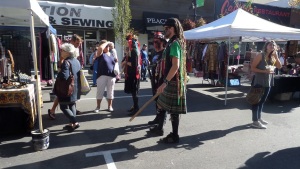 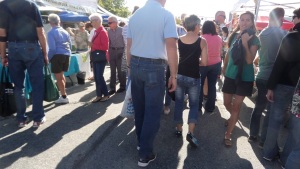 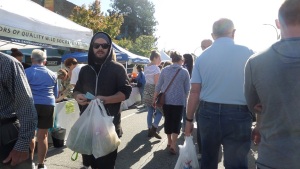 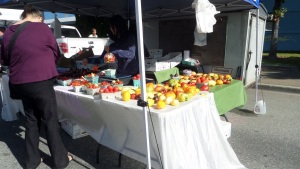 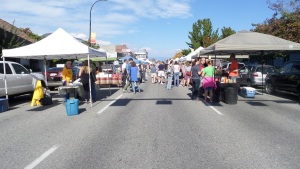 I love autumn.  I love living in a place where we truly have 4 seasons.  And every time a new season rolls around, I find myself exclaiming, “This is my favourite season of all!”  Truly though, there is something very special about autumn.

I awoke this morning to amazing sunshine streaming through the window.  I couldn’t help but run downstairs and fling open the front door–and be stopped in my tracks by a blast of ultra-chilly air! So back inside I went, and for the first time this fall, got out my wool jacket, snuggly scarf, and hat and gloves.  Then I picked up my camera and set off for a lovely morning jaunt through my neighborhood, delighting in the crunch of dry autumn leaves and crispy frosted grass beneath my feet. I knew it was chillier than usual, but was still surprised when I stopped by the oxbow across the street, and discovered it had a thin sheet of ice over much of its surface.  Still, the warmth of the sun wrapped itself around me, and the fresh air was invigorating. As always at this time of year, the colours of the vegetation, ranging from the deep greens of coniferous branches, through the multi-hued tones of reds, oranges, yellows, brasses, and browns, splashed the world with a thousand tints from the Artist’s brush.  What glory!

I hope you will take a moment to wander my neighborhood with me through my camera’s eye in this slide show. Enjoy!

It truly is autumn today.  Early November and the snow line creeps lower down the hillsides morning by morning. Skies are gray, mostly, though the sun bravely pokes through when it gets the chance. It rains most nights, and creek beds dried up in summer are filling with small ponds in low-lying spots. Trees have shed their leaves and their branches are skeletal against the sky. Birds’ nests, hidden all summer, are suddenly clearly seen, as barren and empty as the branches that support them, the chicks grown and departed. On the ground, however, is a glorious riot of oranges, reds, yellows, and shiny browns, crunching underfoot and letting loose the damp-autumn-leaf scents that awaken happy memories of autumns past.

In the wild woods on the east end of Lion’s Park, someone has been hacking away at the underbrush. Daylight rushes into places that have been dark and tangled for a long time. Dead brush lies scattered on the ground; hopefully whoever chopped it down will have the foresight to return and remove it before summer dryness returns and a carelessly tossed spark from a cigarette, or from a transient’s campfire, starts a wildfire. Perhaps a letter to the public works department is in order.

This morning I thought I’d take a walk along the path between the oxbows and the highway, from Kinney Avenue to Green Avenue. Back in May I took in the “Friends of the Oxbows Tour” (part of the annual Meadowlark Festival in the South Okanagan), and posted photos and descriptions then. So my plan today was to take autumn photos of this particular part of the oxbows tour. I’d been through there in the summer, and except for the increased dryness, things were pretty much the same.

But sadly, it seems that “progress” is more important than maintaining the increasingly small areas of green space in our city, whether it be plans to turn several acres of lakeshore park into waterslides, or expand the highway to allow a new access across the channel–and slice off a good chunk of the oxbow trail in the process. Not to mention that in some spots the broadened highway and fence that runs alongside it leaves only a foot or two of space beside oxbows, surely breaking bylaws related to riparian space beside waterways. Oh, and did I mention that you can no longer walk all the way to Green Avenue; a fence has been placed across the path to prevent people enjoying the oxbow in that area, which has been so generously cared for by the resident on its east side. But that’s okay–several areas of the path are now so narrow that one must hang onto the fence to prevent sliding down into the oxbow below. (Click on the pictures to see full size!)

To top all this off, all along the new fencing and highway extension, the workers have tossed into the riparian areas next to the oxbows, the wooden stakes used as markers during the construction. I suppose they reasoned that the markers are biodegradable (well, maybe except for the plastic tags tied around them!), so no problem. No problem if you don’t mind setting an example to locals and tourists of how to litter. Fortunately, I saw potential for them as garden posts, and I picked up all the ones still in good shape and dropped them off to a neighbour who has a large garden. A number of broken stakes are still scattered along the oxbow path; I suppose it would be too much to ask the city fathers to send someone out to gather them? (I’d have gathered all of them, but a person my size and age can only carry so much). 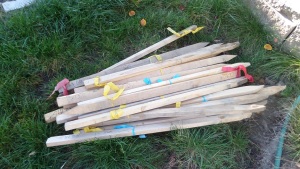 I also see that the oxbows are even more overgrown than they were this spring, and I don’t see the city making any effort to dredge the “introduced” species which are taking over the open water so necessary to birds and wildlife. Maybe if they get overgrown enough, they can be filled in and become locations for more waterslides? Hmmm!

Thankfully, mother nature still manages to show her beauty despite mankind’s best efforts to provide progress and tidy up nature’s wildness–as you can see below.

These Thanksgiving weekend snapshots were taken on October 10 2015 in my neighborhood … mostly at the oxbow at the foot of Baskin Street and Warren Avenue. Such a beautiful place; so much to be thankful for!

Farewell to October days in Penticton

A fond farewell to a beautiful autumn October in Penticton.  November has arrived as I write, and yet our lovely autumn weather holds on.  Though more than a week has passed, these photos could have been taken today.   The sun is shining, the leaves are still bright, flowers still bloom, the sky is clear blue.  What an amazing, beautiful fall!

As tourist numbers drop off with the arrival of autumn weather in Penticton, the Saturday downtown market starts to shrink.  What was a full three blocks, overflowing onto side streets, during summer’s peak period, has dwindled to the 100 block of Main, and features mainly autumn fruits and vegetables, as most of the artisans have packed up for the season.  Empty streetscapes and blowing fall leaves leave a slightly haunted feeling, as one almost senses the ghosts of busy markets past.

But most October market days the famous Penticton sun still shines, though its rays are at a lower angle, the skies are a paler shade of blue, and the shadows are longer and cooler.  Booths that remain are still stocked high with healthy, organic produce, now with the amazingly bright colours and crunchy textures of autumn apples, squash, pumpkins and gourds … and a final few fresh tomatoes, as night temperatures have dipped to frosty levels and bid adieu to most of their compatriots.

The few remaining artisans booths offer cozy blankets and knit hats and mitts.  Even most of the buskers are gone, though a remaining few, wrapped in scarves, bravely strum their guitars and play their fiddles with cold red fingers.    The market itself is still crowded with enthusiastic customers – and their four-legged friends – but the majority of shoppers are locals, wrapped in fall sweaters, and stocking up for the snowy months ahead when the market will sit empty and silent, waiting patiently for the fresh new greens of spring to appear.

What a beautiful, long “Indian summer” we’ve had this year – after a long, cool spring, and a rather late summer (but August did make up for it!).  Summer weather stretched well into September, with only a couple days in the high ‘teens, and many days in the high 20s – and even low 30s C.

But October is here, and so is autumn.  We’ve had a few wet, cool days, but we’ve also had many beautiful sunny days.  Gradually the day time temperatures have been cooling off, moving downward from high to lower teens.  Night time temperatures have been dropping too, reaching as low as 0 C since mid-month, and signs of frost are appearing on car windows and frozen tomatoes.  Of course the cool nights are also responsible for the beautiful fall colours, so no one is complaining.  Right?

Today’s photos present a taste of Penticton’s autumn beauty in early October.  Don’t you wish you were here?

accordian music in the mall

folk dancing in the mall

autumn colours in the oxbows

What is it about autumn that brings poetry to mind?  Quite likely, for those in my age group, it has something to do with the fact that memorizing poetry was an integral part of our education.  One of the first poems we memorized in grade one (kindergarten not yet being invented in the BC public schools), was an autumn poem…

In the other gardens/ And all up the vale,

From the autumn bonfires / See the smoke trail.

Pleasant summer over / And all the summer flowers,

Sing a song of seasons! / Something bright in all,

Flowers in the summer / Fires in the fall!

And also in the fall, bright berries, seeds, grains, leaves … and wild roses!  What? Wild roses blooming in fall?  Check them out … 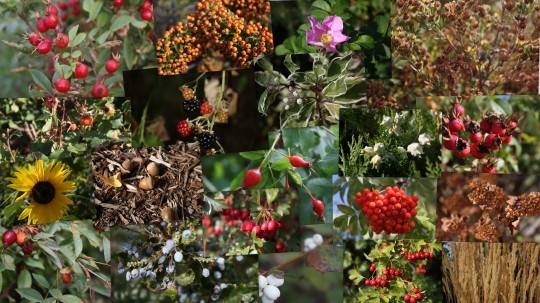 By the way, if you’re feeling inspired to enjoy some autumn poetry, check out this site I recently happened upon:

(And if you’re feeling inspired to write an autumn poem of your own, why not share it with us?)

It’s autumn again – my favourite season of the year!  Well, of course every season is my favourite here in the sunny South Okanagan, where we are blessed with 4 distinct seasons, each with its own unique and wonderful aspects.

And in autumn it’s the amazing colours that hold me in awe.  We’ve had some good cool nights lately – and the trees have responded in all their fall glory!  These snapshots were taken on October 8, during Canada’s Thanksgiving holiday weekend.  And truly, these wonders of nature are so worth being thankful for!  Enjoy! 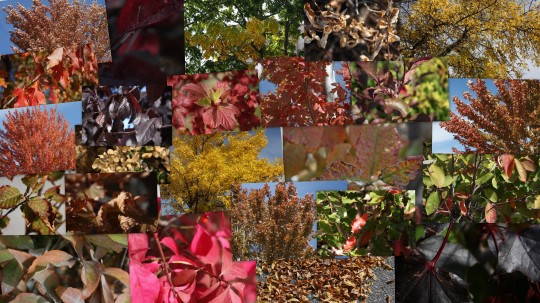 To view pictures large-size, click on any picture. Return to the post with the small-size pictures by clicking the "back" arrow in the upper left corner of your screen, or click the title of the post.